Binge drinking in today’s society is becoming more prevalent now than ever before. Youth are becoming dependent on alcohol by trying to use it as a coping mechanism. Alcohol misuse in these ways can quickly turn into a dependency; and at such young ages many negative effects can arise from this.

According to the “Dietary Guidelines for Americans 2020-2025,” U.S. Department of Health and Human Services and U.S. Department of Agriculture, adults of legal drinking age can choose not to drink or to drink in moderation by limiting intake to 2 drinks or less in a day for men and 1 drink or less in a day for women, when alcohol is consumed. Drinking less is better for health than drinking more.

Patterns of Drinking Associated with Alcohol Use Disorder:

Binge drinking and heavy alcohol use can increase an individual’s risk of alcohol use disorder.

Who Should Avoid Drinking

Certain people should avoid alcohol completely, including those who:

Affects on the Brain

The human brain is in its prime years of development until about the age of 25; so, when youth are binge drinking it is stunting their development in more ways than one. As parents and guardians, being aware of underage drinking, and stopping it, is imperative so children can reach physical and mental maturity in a safe way. For more information on how to prevent underage alcohol misuse, please visit https://teens.drugabuse.gov/drug-facts/alcohol.

It is essential to educate the population about adolescent substance use, which is the largest public health problem in America today. Public health measures must be put in place to[…] 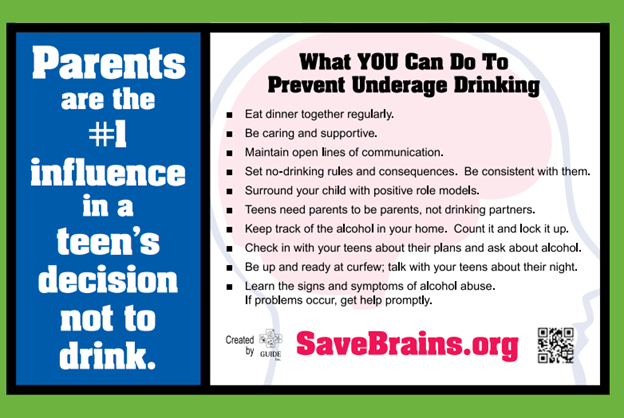 Overview Underage drinking is a serious public health problem in the United States. Alcohol is the most widely usedsubstance of abuse among America’s youth, and drinking by young people poses[…]
DONATE NOW

Partner Financially with One Johns Creek: On the donation form please type in the blank “Other: Please Type A Description” with the notation “One Johns Creek” so that the funds go to the coalition.